For the past year, I’ve been using Joplin for my note management. Previously, I had used Evernote for years, but wanted to get away from it, because all notes stored in the cloud. 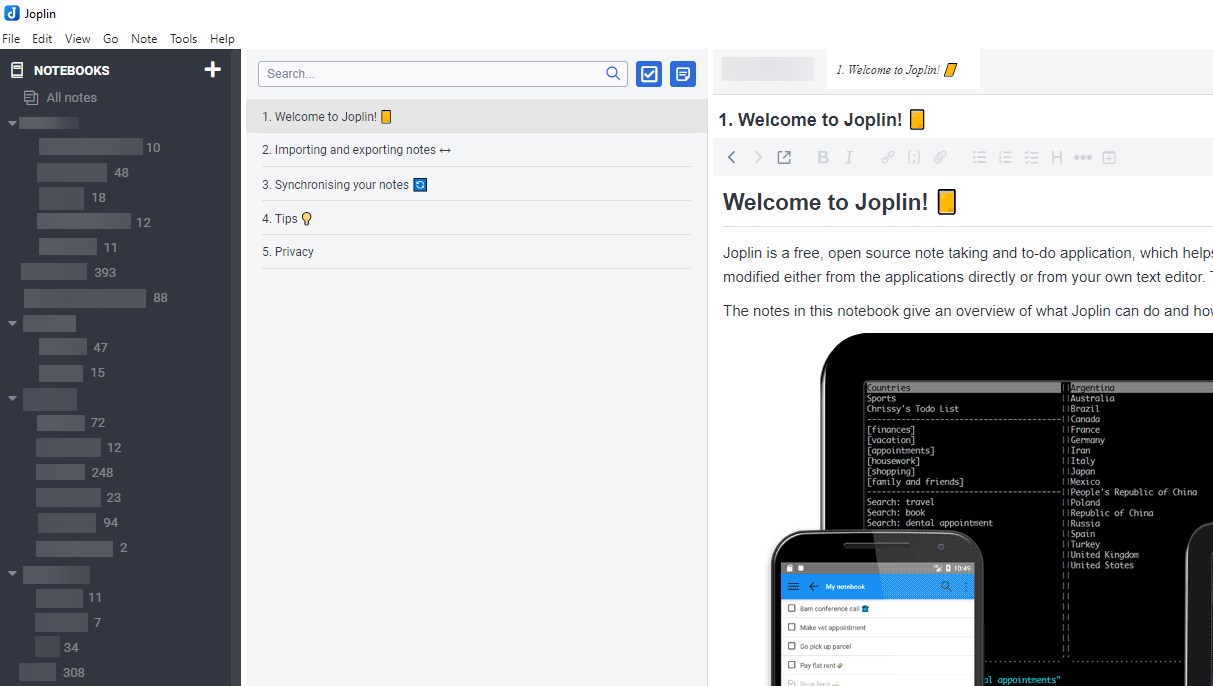 A few pros in my opinion of Joplin are:

Of course, there are not only advantages, but also disadvantages:

Switching from Evernote to Joplin

In Evernote I exported each notebook as a separate enex file and then imported it into Joplin as markdown.

This worked fine for my 5000+ notes and 1700 tags. There is some formatting that is no longer as it was in Evernote, but this is due to markdown or minor errors in the import and was no big problem. In the meantime, the enex import was optimiezed in the last versions and should therefore work even better.

After that, I selected WebDAV on my Synology as the sync target and synced all the data. The first synchronization took a few hours. When this was completed, I set up my mobile devices and other computers for syncronisation. Since the synchronization only works in the foreground on mobile devices (iOS and Android), you can not switch to other Apps or turn the Display off!

Since I don’t use public cloud and my shares are encrypted on the Synology, I don’t have E2EE (end-to-end encryption) set up.

What I missed extremely in my workflows was to mark multiple notes and copy/delete the tags via Ctrl+T. Unfortunately, this function does not exist in Joplin. Therefore I wrote my own plugin Copy tags, which copies the tags of the first marked note to all others.

One great thing about Evernote was that every PDF and other document was OCRed and searchable in Evernote.

Unfortunately, this function does not exist in Joplin, but in the meantime I have started to import all my scanned PDF documents with OCR recognition into Joplin, so that they may be searchable later.

I scan my PDF documents with a Fujitsu ScanSnap IX100 and upload them from the Synology drive to a share of my Syno, where they are converted to a PDF with text overlay by OCRmyPDF which runs on Docker on the Syno. Afterwards this PDF is imported into Joplin.

The hotfolder function I realized very fast using Python and the Joplin API. The script hotfolder.py can be found in my Git Repro Joplin-Tools.

Since version v1.5.7 Joplin Desktop supports an inline viewer for PDF files. Since this was not possible before and is not available on mobile, I have added a preview of the first PDF page in each note. I have done this after the Import from Evernote with my Script add_pdf_previews.py. For new documents, which are imported via hotfolder, this is done automatically.

The whole thing was a big change and a few of my workflow/usages had to be adjusted. But in the meantime I don’t miss Evernote anymore and the Joplin community and developers are great.